In response to requests for clarification about ‘grids’ ~ as we focus with a number of specific light grids to anchor, amplify and protect the LoveLight Circle meditation for Earth’s Ascension ~ here is our perspective on what they are and what they do.

Grids are basically multi-dimensional structures or patternings of metaphysical Light imbued with high vibrational qualities and attributes, that have the function of keeping these attributes stabilized, holding them in place.  So for instance, with the Planetary Ascension in progress here, specific Light Grids are embracing the Earth, with a twofold purpose ~ to provide a higher dimensional ‘landing place’ for the ‘LoveLight Wave’ flowing from Source centre, so that it builds consistently around the planet without dissipating, and secondly to support Gaia and all living beings here in raising the collective consciousness and energy to a lighter state again…that harmonizes with (and is open to receiving) the incoming Wave.

The Christ Light (or Christ Consciousness) and Angelic Grids are Universal/Multiversal, but there are also localized grids ~ such as the Crystalline Heart Grid of Gaia, which is being generated by Gaia Soul, and radiates from the centre of the planet outward, enfolding it. The Unity Consciousness Grid (some call it the Human Heart Grid) is being generated by the intentionality of humans on Earth who awaken to their higher selves and higher dimensional realities, and interweaves with Gaia’s Crystalline Heart Grid, so they function as One. We are also focusing with the Solar Grid that radiates from our Sun, Solaris throughout the Solar System, in which all the planets and their moons are supported and ‘lighted’.

Our localized Unity Consciousness Grid is a ‘focus point’ here of an infinite consciousness grid that we could call the Universal Consciousness Grid radiating from the Heart of Source, and expressing through the Tenth Dimensional level of universal sacred templates of Life through to Fifth Dimensional crystalline light physical actualization (in unity/merge with the Crystalline Heart Grid of Gaia, which is also anchored in 5D).

Grids can also be generated for control ~ the archonic grid utilizes a ‘shadow geometry’ in the lower 4D frequency bands that mimics the sacred templates and grids as ‘false light’ (if you’re feeling into vibrations from your true Heart centre, it has a synthetic, flat feel) or grids that lock light and energy into boxes (including the energy of thoughts, emotions and living life force) so it can be utilized as the controller desires. There have been many control grids in place around the Earth that are in the process of dissipating now.

Where pure LoveLight builds, anchors and holds consistently, grids based in control dissolve….because a high enough vibration of Love naturally reorganizes all energies into alignment with the Heart of Source, Infinite Universal Love. So during a planetary Ascension, we are focusing on and working toward that ‘tipping point’ of a high enough, strongly anchored enough Wave of Love, to transform consciousness, and old grids ~ both those that are inherently of high Love but have become clogged, blocked and stagnant, and those intended for control. Where focus goes, energy flows ~ so keeping our focus and intention wholly with Love and Ascension, and connecting with the high Light Grids, ensures what we do flows with Source, in pure high vibration, as an unwavering Flame of Source.

When we connect to the high Light Grids with loving intention, such as those that hold and radiate the attributes of Christ Consciousness, or Angelic energies of pure Divine Love, or Golden Phoenix energies of Rebirth & Renewal, this not only protects our own vibration while meditating, but eases and amplifies the inflow of LoveLight around the planet, with Gaia, and with/into the collective consciousness/collective energy field.

Last year sometime (early to mid 2016) the Ascension inflow was slowing down, the planetary merkaba was being ‘weighed on’, and the Crystalline Heart Grid wasn’t completely retaining its Light. Gaia’s Twin Flame reunion with Aisaia (in the previously blocked/screened 4D layer of their Flame connection) has immediately strengthened everything ~ but prior to that a 6D grid was put in around the planet in order to stabilize the new/renewing 5D New Earth vibration when it was getting a bit shaky, which we call the 6D Harmonic Grid, a very liquid light-like imprint based on the hexagon/honeycomb-like structure, in golden fluid light (which also enhances Earth’s reception of the golden-yellow Life-giving Light of the Sun through the Solar Grid). 🙂 That has helped steady UP the 5D New Earth vibration, to the extent it is now a lot stronger than at halfway through 2016, from a linear time perspective.

There is also an Earth Grid, which is a composite of the Crystalline Heart Grid of Gaia, the Unity Consciousness Grid, and the meridian channels or chi flow lines in and around the planet that relate to ley lines (but are not necessarily indentical with them).  The meridians are not just at or near the surface ~ the major meridians connect with the crystalline core of the planet, then loop out again, and some go right around the globe, such as the Belinus Line and the St Michael&Mary Line which some of us have worked with clearing and enhancing. Although these channels have been ‘tracked’ and marked out as ley lines in Britain, both these lines (light and life force channels) traverse the whole planet like giant sine waves.

The Solar Grid can be seen as a beautiful 6D golden yellow light-lace that radiates from Solaris, our Sun, through the Solar System, and at the macro scale there is a Galactic Grid, an Intergalactic Grid, and a Universal Grid. If you feel into galactic clusters, within a cluster, the galaxies grouping together have a communal shared grid, or light-lace ~ a magical lacework of flowing, constantly connecting light in higher dimensions. These high vibrational light-weavings are flexible, expansive and adaptive, and radiate these qualities to all living beings along with the specific vibrational attributes they are imbued with.  As higher light pulses flow through the Sun (the higher dimensional solar portal) they spread out through the Solar Grid, like shimmers of white light through the golden filaments, and flow into the localized grids and energy field of each planet in this star system, where it is received according to the consciousness and vibrational state.

If it’s in your heart to focus with the light grids as an embodied Love anchor on Earth, you can assist with intention and meditation, and if you feel called to get physically creative with aligning the light grids, specific sacred geometries can be created using activated crystals etc (activated = cleansed, purified, and imbued through intention with holding and amplifying higher vibrational qualities such as love, peace, grace, compassion, joy, truth, providence)  ~ and when these sacred geometric patterns are connected with the high Light Grids supporting Ascension through focused alignment and meditation from a heart flowing with Divine Will&Love, they help anchor and transmit those higher dimensional attributes into the Earth Grid and collective consciousness field on and around the planet. If you’re already focusing with these alignments, or with Planetary Ascension in any way that invites, expresses and co-creates with pure Love, blessings and thanks to you. 🙂

With Love, Blessings and Gratitude to all dedicating their focus and energy to this Planetary Ascension, may all stay steadily In-Heart as we complete this miraculous transition! 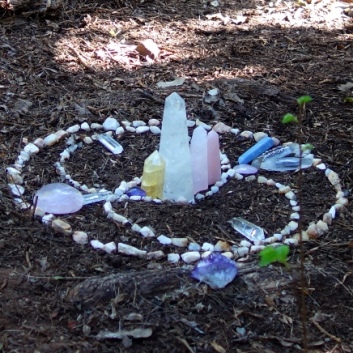 This is a node point (crossing point of two chi flow lines) in the land here ~ with much fluidity and shifting in the Earth Grid recently, this node moved several metres from its former location in a beech grove, to now being nestled between two roots of a giant old Japanese Pepper tree with beautiful curved bridge-like branches, which is itself ‘rebirthing’ into new growth with the east-west flow line now passing through its roots. 🙂
*See the Gaia page at Heart Star for more about node activations.
*See the Inner Heart page at Heart Star for heart-centering in the ‘seat of your Soul’.